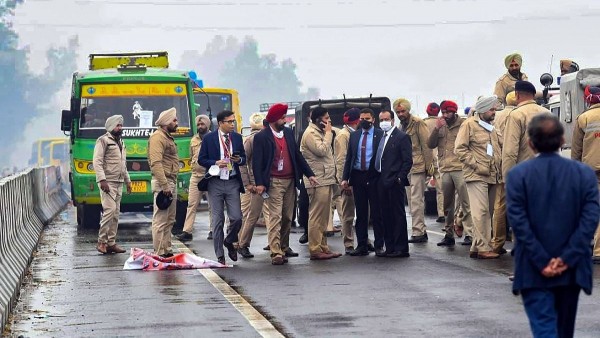 After reports of security breach during Prime Minister Narendra Modi's Punjab visit, BJP chief JP Nadda has said that fearing a resounding defeat the Congress Government is trying all possible tricks to scuttle the Prime Minister's programmes in the state. Prime Minister Modi postponed his scheduled visit to Punjab's Ferozepur due to a security breach.

At the event in Ferozepur, Union health minister Mansukh Mandaviya announced that the Prime Minister would not be able to join due to some reason.

Prime Minister Modi was to visit Ferozepur, Punjab to lay the foundation stone of multiple development projects worth more than Rs 42,750 crore.

In a series of tweets, Nadda said, “Fearing a resounding defeat at the hands of the electorate, the Congress Government in Punjab tried all possible tricks to scuttle the PM @narendramodi Ji’s programmes in the state.”

Referring to the security breach, Nadda said, “What is extremely worrisome is that this incident was also a big security lapse as far as the PM is concerned. Protesters were given access to the Prime Minister’s route while the Punjab CS and DGP gave assurances to SPG that the route is clear.”

Nadda further stated that the state police was instructed to prevent people from attending the rally. Large number of buses were stranded because of the high-handedness of the police & connivance with protesters.

“It is sad that the PM’s visit to launch development projects worth thousands of crores for Punjab was disrupted. But we will not let such cheap mentality hinder progress of Punjab and will continue the effort for the development of Punjab,” he added.

Political controversy has erupted over the security breach in Prime Minister’s route. The Congress has given pin pointed rebuttal to the allegations leveled by BJP President J.P. Nada and alleged that visiting Hussainwala was not part of the original schedule.

Congress spokesperson Randeep Surjewala said that there was no crowd in Ferozepur where the Prime Minister was scheduled to address the gathering, so the visit was cancelled.

Surjewala advised Nadda to “Stop losing cool and all sense of propriety.”

Surjewala said, “10,000 security personnel were deployed for PM’s rally. All arrangements were made in tandem with SPG & other agencies. Route was carved even for all buses of BJP workers from Haryana/Rajasthan. PM decided to take a road journey to Hussainiwala. It was not part of his original schedule to travel by road.”

He said that the BJP leader was in talks with them. “Kisan mazdoor Sangharsh Committee (KMSC) has been protesting against PM’s visit & Union Min, Gajendra Shekhawat has held two rounds of negotiation with them,” he said.

He reminded the BJP for not fulfilling the promises made to the farmers. “Do u know why KMSC & Farmers are protesting against PM Modi? Their demands are: Sack MOS Home, Ajay Misra Teni. Withdraw criminal cases against farmers in Haryana, Delhi & UP. Compensation for kin of 700 farmers who died. Committee on MSP & a quick decision.”

“Finally, the reason for canceling rally is that there were no crowds to listen to Modiji. Stop blame game & introspect on BJP’s anti-farmer attitude. Hold rallies but listen to farmers first!” he added. (IANS)