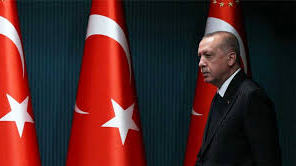 Turkish President Recep Tayyip Erdogan's hypocrisy in proclaiming himself as the "defender" of the Palestinian cause, while maintaining a military, diplomatic and economic alliance with Israel, is legendary. He does it unabashedly. He plays a similar charade when he projects himself as the messiah of Muslims all across the world.

Erdogan inherited from Ottoman Sultans the skill of walking a diplomatic tightrope. For centuries, the Ottoman Empire perfected the political art of seeming to be on both sides of conflicting powers. The Sultans sided with France and England against Germany and with Germany against France and England. The same policy is being pursued now by Erdogan, appearing to be on the Palestinian side, while maintaining multi-faceted relations with Israel.

Similarly, Turkey is a Nato member while purchasing advanced missiles from Russia, which violates Nato policies. Amazingly, Erdogan is simultaneously a good friend of both US President Joe Biden and Russian President Vladimir Putin!

Turkey remained neutral during the Arab-Israeli war of 1948. At its conclusion, the then young Turkish republic became the first Muslim country to recognize the infant state of Israel on March 28, 1949. In January 1950, Ankara sent a career diplomat, Seyfullah Esin, to Tel Aviv as the first Turkish charge d’affaires in Israel.

In 1951, Turkey joined the Western bloc of countries that protested Cairo’s decision to deny Israeli ships passage through the Suez Canal. The Mossad (Israel’s Intelligence Agency) opened a station on Turkish soil in the early 1950s. In 1954, Turkish PM Adnan Menderes, while on a visit to the US, called on Arab states to recognise Israel.

Erdogan paid an official visit to Israel in 2005 and he hoped to play a role in the Israeli-Palestinian conflict. Erdogan was also the first Muslim leader to visit the grave of Zionism founder Theodor Herzl in Israel and meet with then Israeli Prime Minister Ariel Sharon. Erdogan is trading in the Palestinian cause.

Relations deteriorated after the 2008-09 Gaza War and the 2010 Gaza flotilla raid on the Turkish vessel by Israeli forces. In March 2013, Israel apologised for the raid, opening a path for normalised relations.

Recently, Arab states like UAE signed a peace agreement with Israel, also known as “Abraham Accord”, in exchange for recognition for the state of Israel and stalling further settlement in the West Bank. Turkey reacted astonishingly and threatened to withdraw its ambassador from Abu Dhabi.

Commenting on this, a Jordanian writer, Noura al-Moteari, asked: “Does Turkish President Erdogan have a mental illness and a dual personality, or does he know for sure that his followers from the oppressed Turkish people and the Muslim Brotherhood follow him with blind loyalty and do not see beyond the end of their noses? How does Erdogan threaten to withdraw his ambassador from Abu Dhabi because of the historic peace agreement with Israel, while the Israeli embassy in Turkey is active?”

Similarly, the Saudi newspaper Okaz wrote in an editorial: “Erdogan’s regime does not miss an opportunity to trade in the Palestinian issue and deceive everyone. Despite Erdogan’s hypocrisy, which has become exposed to Arab and Islamic public opinion, his regime continues to play on the feelings of Muslims. The Turkish president appears to be applying double standards by ignoring the presence of his ambassador in Tel Aviv.”

Turkey and Israel also have a Free Trade Agreement (FTA). According to the 2018 figures, Turkey is the major trading partner country of Israel. Turkey’s export products to Israel include textiles, iron, chemicals and oil distillates, steel, land, sea and air vehicles, along with ceramic and glass products. Turkey also purchases high-tech defence equipment, whereas it supplies Israel with military boots and uniforms. Turkish Airlines is the most frequent airline to fly to Israel.

According to data from the Ministry of Commerce of Turkey, Turkey’s foreign trade volume with Israel has stood at around $5 million – $6 million since 2013, reaching $6.6 million in 2019, with $4.4 million in exports and $1.6 million in imports. In January 2020, foreign trade with the country further increased.

Turkey considers Israel the sixth-largest exporter. According to the Israeli Chamber of Commerce, Israeli exports to Turkey in 2020 rose 39 per cent to $950 million, and imports from Turkey rose 16 per cent to $1.05 billion. Independent estimates put Turkey-Israel trade volume at a much larger scale. Israel is among Turkey’s top 10 export markets.

The curve of Israel and Turkish diplomacy has followed a labyrinthine path. The relations between the two countries touch a low and then rise again after reconciliatory efforts. Sometimes, it seems Turkish President Erdogan thinks Israel to be the enemy number 1 in the world, and then suddenly his administration is seen doing patchwork to restore ties between the two countries.

On 14 May 2018, after the United States recognised Jerusalem as the capital of Israel and rioting broke out, Erdogan accused Israel of carrying out a “genocide” and behaving like a “terrorist state’. Since then, the bilateral diplomatic representation has been at the level of charge d’affaires rather than ambassador in response to the transfer of the US embassy to Jerusalem and to Israeli policies in the Gaza Strip.

However, according to Seth J. Frantzman, executive director of the Middle East Center for Reporting and Analysis, the rhetoric and extreme positioning were part of a deliberate choice by President Erdogan to distract from failures at the economic front and containing Covid-19 pandemic in Turkey. True to Frantzman’s observation, Ankara informed Israel in March 2021 that it was set to appoint an ambassador to Tel Aviv once Israel commits to simultaneously reciprocating the gesture, according to a media report.

Meanwhile, as a token of its support to Palestinians, Turkey hosts some members of Palestinian resistance group Hamas and has also let the group to establish its office in Istanbul. But, this is also seen as a ploy to find better leverage while negotiating with Israel.

Arab News reported in March 2020 that Turkey was in controversial talks with Israel over mutually beneficial maritime borders in the Mediterranean. These talks have been kept in secrecy, but according to sources, they are still in progress. If this project materialises, Turkey will share a border with Israel.

(The writer is the National President of Muslim Students Organisation of India. The views expressed are personal)