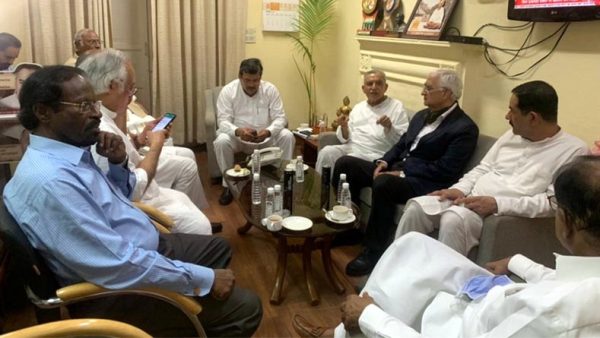 The office of the Young Indian in Delhi has been sealed by the Enforcement Directorate over a case linked to the National Herald newspaper. Police have been deployed outside the residence of Congress chief Sonia Gandhi, questioned recently by the ED.

In the latest development in connection with the National Herald matter the Enforcement Directorate (ED) on Wednesday sealed the office of Young Indian Private Limited, situated on the fourth floor of the National Herald building here. ED sources said that senior Congress leader Mallikarjuna Kharge was called by them as he was the principal official in YI, but their request fell on deaf ears.

The ED sources said that they had asked Kharge to provide an official of YI so that they could go on with the search proceedings.

But after hearing this Kharge left the National Herald office and didn’t provide them with any official.

“We wanted to make the seizure memo in front of that official of YI. As we weren’t provided anyone we had to seal it to keep the proofs intact,” the source said.

The ED has said that if Kharge will provide them an official of YI who will assist them in the search, they will open the sealed office.

Earlier in the day the ED sealed the office of YI situated in the building of Herald House at Bahadurshah Zafar Marg.

The ED pasted an order on the building of the Herald House.

“This is hereby declared that this premises not be opened without prior permission from the Directorate of Enforcement,” read the order.

The sources had said that they did this so that the evidence was not tampered with.

“We had called Herald officials to assist us but senior persons were not cooperating and were not coming forward to assist in the search. We were left with no other option but to seal the office,” the official said.

On Tuesday, the ED had conducted a search operation at the Herald office. It was a day long search which begun in the morning and went on till late night.

The ED has not released any official statement in this regard.

Besides temporarily stationing additional police personnel outside the 10 Janpath Road residence of Sonia Gandhi, the police also temporarily barricaded the roads leading to the Congress headquarters.

The Congress is holding a meeting of its senior leaders including Salman Khurshid, Mallikarjun Kharge, Pawan Bansal and P Chidambaram.Declaring that the party is under “siege”, senior party leader Jairam Ramesh tweeted, “Delhi police has surrounded our HQs, and homes of INC President & ex-President.This is the worst form of vendetta politics. We will not submit! We will not be silenced! We will continue to raise our voice against injustices and failures of Modi Sarkar!”

“National Herald was started by Jawaharlal Nehru, Sardar Vallabhbhai Patel.. etc. to involve the people of India in the freedom struggle. Today the investigative agency ED is being misused to tarnish it and the image of Congress. Not only against us, ED is being used against every opposition party in the country to destabilise the governments,” senior Congress leader Adhir Ranjan Chowdhury said.

The Enforcement Directorate raided the offices of National Herald in Delhi’s Herald House yesterday. Eleven other locations linked to the AJL were also raided.

The raids came days after questioning Sonia Gandhi in an alleged money laundering case linked to the newspaper. The ED has also questioned Rahul Gandhi –Sonia Gandhi’s son and former Congress chief — for about 50 hours in the case.

The YIL took over Associated Journals Limited, which runs the National Herald. It took over 800 crores in assets of AJL and according to the Income Tax department, this should be considered an asset of Young India shareholders Sonia Gandhi and Rahul Gandhi, for which they should pay tax. The Congress has claimed that the Young Indian is a non- profit, and so the shareholders cannot make any money from its assets.

The Enforcement Directorate has argued that Young Indian has not done any charitable work and cannot claim the benefit. Its only transaction was the transfer of AJL’s debt. The Congress has countered that the newspaper is the charity.