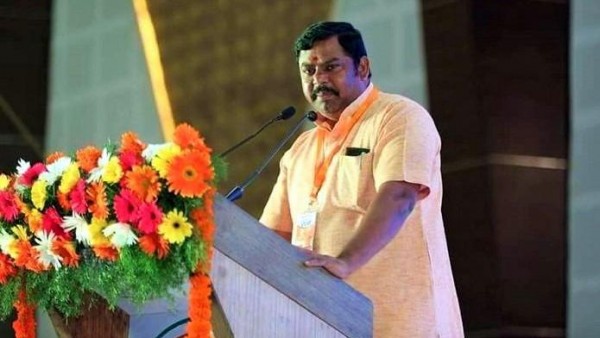 The Election Commission of India has ordered the Chief Electoral Officer of Telangana to register an FIR against Telangana's BJP MLA T. Raja Singh for threatening Uttar Pradesh voters of dire consequences if they don't vote for the saffron party.

With no response received from Raja Singh within the stipulated time to the show cause notice issued by it, the poll panel asked Telangana CEO to register FIR against relevant sections of the Indian Penal Code and the Representation of the People’s Act.

The Commission also prohibited the MLA from holding any public meetings, processions, rallies, road shows and interviews, public utterances in media in connection with the ongoing elections for 72 hours from 6 p.m. on February 19.

Stating that the MLA violated sections 171 C and 171 F of the Indian Penal Code, section 123 of the Representation of the People Act and Model Code of Conduct, the poll panel deplored the statements made by Raja Singh and censured him for the violation.

The Election Commission had on Wednesday asked Singh to show cause within 24 hours as to why appropriate penal action under criminal law should not be initiated against him.

“Take notice that in the event of no response from your side within the stipulated time, it will be presumed that you have nothing to say in the matter and the Election Commission will take appropriate action or decision in the matter without making any further reference to you,” read the notice.

The MLA through his advocate sought time till February 21 to furnish the reply but the Commission asked him to reply by 1 p.m. on February 19. The poll panel, however, received no response from him within the stipulated time.

The controversial MLA, in the video released after the second phase of polling for Assembly election in Uttar Pradesh on Monday, threatened voters that if they don’t cast their votes for BJP their houses will be demolished and they will be driven out of the state.

The controversial MLA from Goshamahal constituency in Hyderabad voiced concern over ‘huge voter turnout in some areas’ of Uttar Pradesh during the second phase of polling on Monday. He believes that UP CM Yogi Adityanath’s enemies came out in large numbers to cast their votes. He appealed to ‘Hindu brothers and sisters’ to come out and vote in third and subsequent phases.

The Election Commission on Saturday banned Telangana BJP MLA T. Raja Singh from campaigning in UP assembly election for 72 hours. The 72-hour ban began from 6 p.m. on Saturday. (IANS)