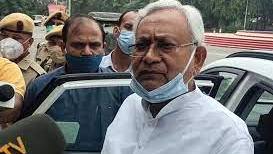 Nitish on his own path.

Facing criticism, the JD-U has threatened its alliance partners in Bihar to avoid giving statements to the media over liquor ban or pull out of the government.

Dr Sanjiv Kumar, a JD-U MLA, on Tuesday said that leaders of alliance partners should interact with the Chief Minister on any issue especially on the liquor ban before going to the media.

“We have an alliance of four parties in Bihar. It is obvious that the ideology and agendas of all the parties would not be the same. If we have any differences, we should sit together and discuss with the Chief Minister before going to the media,” Kumar said.

“The decision of Chief Minister Nitish Kumar is final. He always looks for the development of Bihar. If any party has a different opinion from the Chief Minister, they are free to take decisions. No one will stop you if you want to separate from the alliance. Staying in the government and also criticizing its decisions will not be tolerated anymore,” Kumar said.

Following the liquor tragedy in Nalanda on Saturday that claimed 13 lives so far, BJP and HAM in particular are criticizing the Nitish Kumar government for the poor implementation of the liquor ban in Bihar. BJP state president Sanjay Jaiswal has opened a front against Chief Minister Nitish Kumar. He said that the nexus of senior officers, police and mafias are responsible for poor implementation of the law.

Jitan Ram Manjhi, former chief minister of Bihar and president of HAM has already said: “If PM Narendra Modi would withdraw three farms law, why CM Nitish Kumar has made liquor ban a prestige issue. He can withdraw this law as well.”
Facing criticism over the poor implementation of the liquor ban, the Nitish Kumar government in Bihar is likely to give some relaxation to violators.

According to a top official of the JDU, the state government is ready to review this issue and a proposal is likely to be put on table in the upcoming budget session of the Bihar Vidhan Sabha.

As per the proposal, the violators who are caught in drunken state can be let off after paying penalty on the spot. Though, it is not applicable on repeat offenders. A person repeatedly violating the norms of liquor prohibition law would be liable to face jail term.

Such a relaxation would allow liquor consumption at home and would also promote the home delivery concept, which is already popular among habitual drinkers in Bihar.

The JDU official further said that the vehicle used for smuggling of liquor could be released after paying a fine.

He said that the Chief Minister is under huge political pressure after a series of spurious liquor tragedies in different districts in the last four months that have taken the lives of more than 80 persons and many others have lost their eyesight.

Reacting to it, Danish Rizwan, the chief spokesperson of HAM said: “Chief Minister Nitish Kumar, instead of bringing amendment or review of liquor prohibition law, should do a survey on this issue. If common people of the state are satisfied with the amendment or review, our party will not go against it. If people of Bihar are in favour of withdrawal of the liquor ban, we also respect that decision.”

This issue is severely affecting Nitish Kumar government especially after its alliance partners BJP and HAM are extremely vocal. They want a review of the liquor prohibition law. The liquor ban was enforced in Bihar in April 2016.

Though, this would not be the first case of amendment in liquor prohibition act. In 2018, the state government made a provision to grant bail to normal offenders at the police station level. The offenders have to pay Rs 50,000 as fine. In case of offenders unable to give a penalty, they would be liable to face jail term. Under the liquor prohibition law, the maximum jail term is 10 years. (IANS)