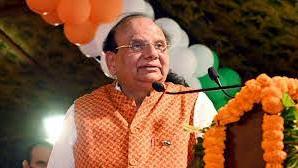 Reacting to the developments, deputy chief minister Manish Sisodia on Friday demanded that the office of ITDC chairperson Sambit Patra be also sealed as he is the Bharatiya Janata Party (BJP) spokesperson.

Jasmine Shah’s office was sealed at 10.20pm on Thursday, according to documents seen by HT, after the DDC vice-chairperson was given two opportunities to reply to a show cause notice but failed to do so.

The office of Delhi Dialogue and Development Commission (DDC) vice-chairperson Jasmine Shah has been sealed on orders of lieutenant governor Vinai Kumar Saxena, officials aware of the matter said on Friday, adding that the LG has also urged chief minister Arvind Kejriwal to sack Shah on charges of misusing his office for political purposes.

Shah’s office was sealed at 10.20pm on Thursday, according to documents seen by HT, after the DDC vice-chairperson was given two opportunities to reply to a show cause notice but failed to do so.

Reacting to the developments, deputy chief minister Manish Sisodia on Friday demanded that the office of ITDC chairperson Sambit Patra be also sealed as he is the Bharatiya Janata Party (BJP) spokesperson.

Despite repeated calls and messages, Patra did not respond to Sisodia’s comment.

Shah said the LG’s order has no “basis in law”. “The action taken by Delhi’s LG to seal my office at DDC and stop me from discharging my duties is without jurisdiction, completely illegal and unconstitutional. The LG has said I cannot act as a spokesperson for AAP while being Vice Chairperson of DDC. I have one question for the LG – Sambit Patra is a National
Spokesperson of BJP while also holding the office of Chairman of ITDC. If my office is being sealed, then why not his? How can two laws operate in the same country – one for AAP and one for BJP?” Shah said in a statement.

The DDC — the state government’s think-tank — was founded in 2015 and has been behind the formulation of various policies by the Aam Aadmi Party (AAP) government in Delhi. Shah, the DDC vice-chairperson, holds the rank of a minister in the Delhi government and is entitled to pay, allowance and other facilities at par with other ministers.

The charges against Shah stem from a complaint lodged against him by West Delhi MP and BJP leader Parvesh Sahib Singh in September, in which he accused the DDC vice chairperson of using his office for political activities like attending political debates on TV on behalf of the ruling Aam Aadmi Party (AAP).

According to the official in the LG’s office, Shah was issued a show cause notice on October 17 by Vijender Singh Rawat, the director of the planning department — the administrative department of the DDC — but Shah failed to submit his reply.
Instead, Shah stated that the response had been submitted to the planning department minister — a portfolio under Sisodia. He also noted that the LG has no jurisdiction over him, and only the CM has the power to remove him.

An order dated November 17, issued by planning department director Rawat, stated, “LG has ordered that Jasmine Shah be restricted from discharge of functions as vice chairman DDCD and to use any privileges and facilities connected with the office of VC DDCD with immediate effect.”

The order further directed that “the office chamber of vice chairperson DDCD at 33, Shamnath Marg may be locked in order to prevent access of the premises; and the vehicle and manpower/staff facility should also be withdrawn with immediate effect”.

HT has seen a copy of the order.

In compliance with the order, a team of officials led by SDM Civil Lines sealed Shah’s office at 10:20pm on Thursday. A notice signed by the SDM Civil Lines read: “Entry in this room is not allowed to anyone whosoever tries to break the seal and enter the room will be prosecuted.”

AAP Delhi convenor Gopal Rai said, “Out of frustration, they (the BJP) have given orders to seal the office of Jasmine Shah by making baseless allegations that he is also the spokesperson of AAP. Sambit Patra is the spokesperson of BJP despite holding the post of chairman of ITDC, and yet his office is not sealed. This clearly shows that the BJP is completely flustered and they have no clue what to do.”

“It is clear that LG’s order has no basis in law. Last month, a PIL was filed in the Hon’ble Delhi High Court, which sought the dismissal of several politically active persons holding positions in Central or State governments, including Sambit Patra and myself. The Hon’ble judges asked a single question that neither the BJP or Central govt had any answers for – which law or constitutional provision or rules are being violated if these public servants are politically affiliated? LG’s order today makes no mention of which law or rules are being violated,” Shah said in his statement.

However, West Delhi MP Singh told HT said despite being a public servant, Shah had acted as the official spokesperson of the AAP. “I wrote to the LG to bring this in his notice and had demanded his sacking,” he said.

After Singh’s complaint against Shah, the planning department had carried out an inquiry, and after thoroughly analysing various video footages of Shah’s presence on TV shows, transcripts of press conferences addressed by him, and news reports in newspapers and news portals, the department prima facie found that Shah had been using his government office and other perks to further a partisan political agenda, an official in the department said.

The findings were sent to the Delhi chief secretary, who further referred them the law department for comments and vetting.
“The law department gave its opinion in this matter and opined that Jasmine Shah was a ‘public servant’ and not working on an ‘honorary post’,” the above quoted official said.

HT has not seen the observation of the law department on the file.

The reports of the law and planning departments were then scrutinised by the chief secretary and sent to the LG, who instructed that Shah be given a show cause notice to explain his misconduct, before initiating any further action, an official aware of the matter said.