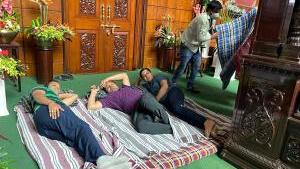 The Karnataka Congress will continue the round the clock agitation by spending another night in the state assembly on Saturday demanding dismissal of Minister for Rural Development and Panchayat Raj K.S. Eshwarappa for his remark that one day the saffron flag will be hoisted at the Red Fort.

The protest which has been led by Opposition leader Siddaramaiah and state Congress President D.K. Shivakumar at the assembly entered the third day on Saturday. All attempts by the ruling BJP to convince Congress leaders to withdraw their agitation went in vain.

Speaker Vishveshwara Hegde Kageri has adjourned the session to Monday. While announcing adjournment, he said he is doing it with a heavy heart.

Congress state President Shivakumar has reiterated that they will not budge until Eshwarappa is sacked for insulting the national flag. “We will see to it that he is sacked, I will see how BJP can save him,” he has challenged.

Meanwhile, Congress legislators spent Friday night by playing ‘antakshari’ in the house. Legislators sung Kannada and Hindi film songs and enjoyed themselves. They sang Bollywood hit songs “Lo chali mein”, “mere rang me rangne wali” and Kannada hit songs “naa ninna mareyalaare” and others. The food was served to them in the assembly.

Eshwarappa, a few days ago, while reacting to the Congress allegation that BJP is distributing 60 saffron shawls to students to take up hijab row, said the saffron shawls were manufactured at a factory in Ayodhya and brought to the state in ‘Hanuman’ transports. He also said that one day a saffron flag will be hoisted at the Red Fort.

The Congress has announced launching of state-wide protests from Monday in this regard. (IANS)