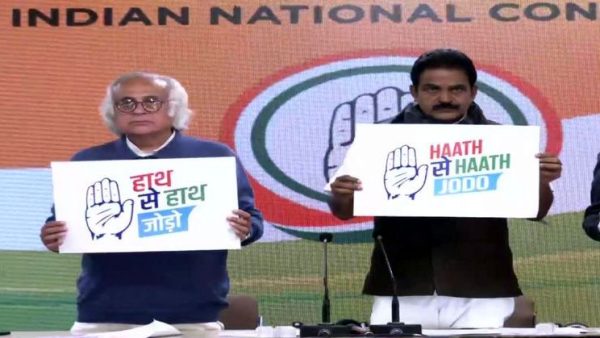 With the new campaign, which it says is different from 'apolitical' Bharat Jodo Congress aims to reach every Indian household in two months. Its direct target — failures of Modi govt.

Congress’ Bharat Jodo Yatra (BJY) led by Rahul Gandhi is almost at an end, but the party is already gearing up to launch another campaign — Haath Se Haath Jodo Abhiyan — even before the yatra finishes on 30 January with a flag hoisting ceremony in Srinagar.

Speaking to media persons, Congress’ general secretary (organisation), K.C. Venugopal, said “The Abhiyan is scheduled for two months, from 26 January to 26 March, but may be extended for another two or three months if required.”

During this campaign, the party aims to reach all households in the country and, unlike Bharat Jodo — which the party says was ‘apolitical’ and ‘delinked from the election process’ — the abhiyan would have a ‘political packaging’.

The party Saturday also released the logo for the Haath Se Haath Jodo Abhiyan, which has the ‘hand’ symbol of the party, unlike the yatra’s logo. “The colours for both the BJY and abhiyan are the same. But you would have noticed that the Abhiyan logo has the ‘Abhay Mudra’ which is our election symbol,” said Jairam Ramesh, Congress MP and general secretary in-charge communications, while addressing reporters in Delhi.

“What we mean to say by this is that the abhiyan is the second phase of the yatra. The BJY went beyond politics and issues were raised on the basis of ideology by Rahul Gandhi. It had nothing to do with elections. But in the Haath Se Haath Jodo Abhiyan, we have a direct target — the failures of the Narendra Modi government,” he added.

ThePrint had reported earlier that during the abhiyan, which will be conducted in 2.5 lakh gram panchayats, 6 lakh villages and 10 lakh polling booths, party workers are expected to go to each household and hand them a letter from ‘Aapka Apna Rahul’ as well as a ‘chargesheet’ against the Modi government. The said charge sheet was also released by the party today.

Titled ‘Sab ka Saath, Kuch ka Vikas, Sabke Saath Vishvasghaat’, the chargesheet mentions the various issues on which the Congress has been hitting out at the BJP. A section titled ‘Suit boot ka loot’ (theft by corporates) talks about PM Modi’s relationship with businessmen and corporate loans that have been waived off. It also mentions privileges given to Modi’s ‘close friends’ without naming anyone.

Another section called ‘Prachaar and parivaarvaad’ talks about money spent on publicity of the PM, electoral bonds received by the BJP and about how the Home Minister Amit Shah’s son Jay “runs Indian cricket while Agniveers are told to become security guards”.

Venugopal further said that the Bharat Jodo Yatra, currently in Jammu, will be in Kashmir Valley on 27, 28 and 29 January. The ‘padyatra’ part of the yatra will get over on 29 January, she added.

On 30 January, Rahul Gandhi will hoist the national flag at the Congress’ office in Srinagar at 10 am. At the same time, all District Congress Committees will also hoist the tricolour in their respective districts “in solidarity”.

Thereafter, a public meeting will be held at the Sher-e-Kashmir Stadium in Srinagar for which leaders from 23 ‘like-minded’ opposition parties have been invited by Congress president Mallikarjun Kharge. “We have started receiving responses, but we’ll be in a position to tell you who all are coming in a few days,” said Venugopal.