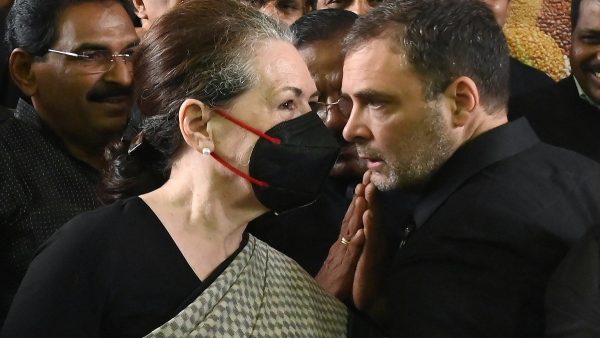 Black was the colour of the protest for the Congress on Friday --from Kurta and headgear to scarf and sari. These were among the sartorial choices the party leaders opted as part of a novel protest to draw the government's attention to what they said was a "grim" economic situation in the country. The 136-year-old party which is known for its traditional approach to protests sprang a surprise with what many saw as an out-of-the-box messaging by deciding to go black as its dress code for the nationwide protest against price rise, hike in GST on essential items and unemployment. Several Congress leaders, including Rahul Gandhi and Priyanka Gandhi Vadra, were detained amid a massive protest outside the party's Delhi headquarters. They were released after six hours.

Congress leader Rahul Gandhi, who was detained earlier in the day on Friday by the Delhi Police, has been kept at new police lines, Kingsway Police camp, here in the national capital, a Delhi Police official said.

“They were detained from the North fountain near Parliament. They are detained in Kingsway camp,” a senior Delhi Police official said.

Congress had announced a nationwide protest against the policies of the Central government, which has led to a rise in unemployment and inflation in the country.

Wearing black clothes, the MPs, under the leadership of Rahul Gandhi, tried to take out a march from the Parliament House to the Rashtrapati Bhawan. However, as the parliamentarians moved forward towards Rashtrapati Bhawan, the Delhi Police stopped them midway near Vijay Chowk.

The police tried to convince Rahul for a while, but as he was refusing to stop, they detained him and took him in a bus to Kingsway Police camp.

While speaking to the media persons before getting detained, Rahul Gandhi accused the Delhi Police of manhandling the parliamentarians. “We are standing here on the issues of price rise and unemployment. We wanted to move forward but the police did not allow us,”Gandhi said.

When asked about the MPs being manhandled, Rahul said, “That is fine. I’m happy to be manhandled. Our job is to resist these forces, our job is to make sure that Indian democracy is protected. Our job is to raise issues of the people like price rise and unemployment and we are doing that.”

Around 10 days ago also on July 26, Rahul Gandhi was detained in Kingsway camp during a protest march carried out by the Congress lawmakers from Parliament to Rashtrapati Bhawan.

Congress leader Priyanka Gandhi Vadra was detained from outside the party headquarters as she tried to lead a protest march towards Prime Minister Narendra Modi’s residence.

Before getting detained, the Congress general secretary crossed the three-feet tall barricade by jumping it. As she tried to move forward, she was stopped by the women police personnel and subsequently the Congress General Secretary sat in the middle of the road in protest.

Priyanka Gandhi, who resisted her detention jostling with cops for 20 minutes, was lifted, dragged, shoved into a police car and taken away.

Apart from Priyanka Gandhi, several party leaders, including Sachin Pilot, have been detained by the police.

The party is protesting against the government over various issues, including inflation, GST and unemployment from two fronts — protest march from 24, Akbar road to the Prime Minister’s residence and from Parliament to Raisina Hills.

The Delhi Police has denied permission to the Congress for holding a protest march in the national capital. (IANS)