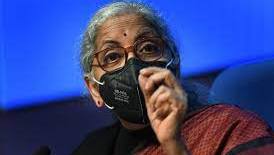 A private company in 2005 came up with an offer to start a bouquet of multimedia and telecom services and got into an agreement with Antrix Corporation, the commercial wing of state space agency, Indian Space Research Organisation (ISRO), and made a deal of leasing out two of ISRO's satellites, GSLV-6 & GSLA-6A, for private services at a throw-away price. It took six years for the then Congress-led UPA government to sense this fraud and later the agreement was cancelled, but then the arbitration started as the private company claimed millions of dollars from the government of India, which was a brazen act of corruption, Union Finance Minister Nirmala Sitharaman claimed on the apex court verdict on the Antrix-Devas deal.

The Antrix-Devas agreement was signed in 2005, and after years of controversies, it was cancelled in 2011. Serious objections were raised by various state agencies and departments on this agreement, as it authorised Devas Multimedia Pvt Ltd to use S-band, a very rare bandwidth, mostly used by the armed forces for their communications, and thus it was directly related to national security, said Sitharaman, as she accused the Congress of putting national security on stake for its ‘crony capitalism’.

But the brazenness of corruption didn’t stop there only, as an arbitrator was not even appointed by the then UPA government to put forward the government’s side, even after repeated requests, she said.

It shows the half-hearted participation of the UPA government, which indirectly supported Devas Multimedia’s strategy to come to India on the pretext of investment, she added.

The company siphoned off as much as Rs 488 crore in the name of starting a US-based subsidiary, IT support services and contesting off-shore legal battles in international courts.

Interestingly, the company claimed to provide the said services through Devas Device, Devas Services and Devas Technologies, which were not existing then, said Sitharaman quoting the SC ruling on the Antrix-Devas agreement, upholding the National Company Law Tribunal (NCLAT) order, which earlier had upheld the earlier order of the Bengaluru bench of NCLT that last year directed winding up of Devas Multimedia and appointed a provisional liquidator for the purpose.

Later the company went to international courts and legal fora to claim $1.13 billion as compensation for its losses. Devas then moved the Permanent Court of Arbitration (PCA) on the basis of India- Mauritius bilateral investment protection agreement, which later directed the Indian government to pay $111 million with interest and legal cost.

Devas Multimedia also won before the International Chamber of Commerce (ICC) to get an award of $1.3 billion against Antrix. On the other side, the CBI and the ED also started investigating the Antrix-Devas deal and filed FIRs. Even the Ministry of Corporate Affairs had initiated an investigation. (IANS)