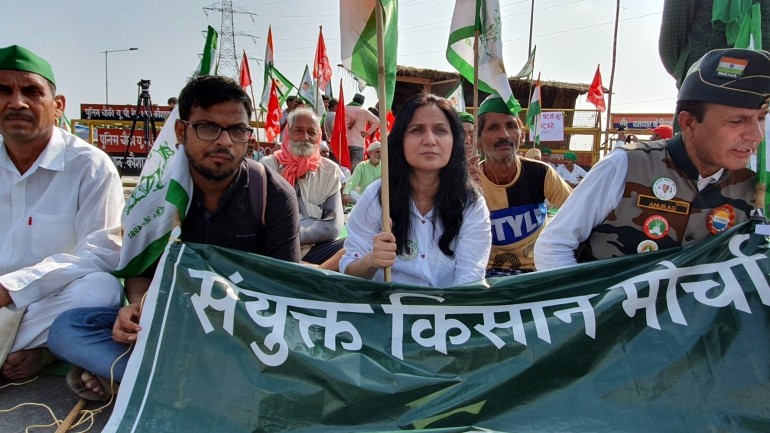 While the Centre's announcement to repeal three farm laws is seen as a political decision with eye on forthcoming assembly polls in five states, the BJP claims it has nothing to do with elections as the party has won many states after laws were passed by Parliament. However, the BJP believes that Prime Minister Narendra Modi's announcement to repeal three farm laws will help the party in the forthcoming Assembly polls. The BJP is also eyeing political dividend in 40 Lok Sabha seats spread in Western UP, Haryana and Rajasthan in the next general election in 2024. The saffron camp also feels that the decision will help the party to form an alliance with the newly launched party of former Chief Minister Amarinder Singh in Punjab.

In his address to the nation on Wednesday morning, Prime Minister Narendra Modi announced the government’s decision to repeal the three farm laws in the upcoming winter session of Parliament.

Sources in the Bharatiya Janata Party (BJP) said there have been attempts made to call the decision to repeal the laws as a political move by the government for upcoming assembly polls in Uttar Pradesh, Punjab, Uttarakhand, Goa and Manipur but it is not true and far from reality.

“However, everyone must remember that BJP has won many elections by-polls after the farm laws were passed in the Parliament last year,” a party source said.

The saffron party mentioned that after three farm laws were implemented in September last year, it has won Assam assembly polls by winning 60 out of 90 it contested.

In West Bengal Assembly polls, the BJP has won 77 seats out of the 291 contested while it had won three out of the same number of contested seats in 2016.

The BJP became a part of the government in Puducherry for the first time ever after securing six seats in polls held earlier this year.

The party also mentioned by-polls victory in Maharashtra in May.

“We won by-polls in Assam, Madhya Pradesh, Telangana and Karnataka held on October 30. We swept the Zila Panchayat chairpersons’ elections In Uttar Pradesh. We also won civic polls in Gujarat and Karnataka. It is completely wrong to say that the decision to repeal the farm laws is a political move with an eye on next year’s assembly polls in five states,” a senior party functionary said.

Referring to the Prime Minister’s word that whatever he did was for farmers and what he is doing is for the country, another senior functionary said that the farmer’s movement was being explored by vested interest groups who wanted to use this movement to weaken India.

“There were inputs that some international forces are planning to create unrest in the country, especially in Punjab. Decision has nothing to do with politics, for the Narendra Modi government’s national interest is first priority and it is above politics. Elections come and go but for the BJP nation comes first,” he said.

A senior leader pointed out that despite BJP being in majority in both Houses of Parliament, the Prime Minister has taken the more democratic and statesmanlike approach.

“We have a majority in Parliament, we have a government in a large majority of states as well. Yet, the Prime Minister has taken a decision because it was clear that there were still a small number of people who were opposing the farm laws and did not see the good that was to come out of it. Prime Minister Modi has taken the more democratic and statesman-like approach,” he said.

In his address to the nation, Prime Minister Narendra Modi said, “It seems some of the farmers are still not convinced by our sincere efforts. We have decided to repeal the three farm laws. The constitutional process to repeal these laws would be completed during the Parliament Session that would start at the end of this month.”

Since November last year, farmers from different states particularly from Punjab, Haryana and western UP have been staging protests at the borders of the national capital demanding repeal of the new farm laws and legal guarantee for MSP on their produce.

Rakesh Tikait has been leading the farmers protest at Ghazipur border which is one epicentre of the ongoing agitation along with Tikri and Singhu border where leaders from the farmer unions in Punjab have been blocking the highways for nearly one year.

A senior party leader said that the decision will not only end the agitation but help the party to reach out to the farmers with a message that the government is concerned about them.

“Amid a few demands, one demand to repeal the new laws has been finally accepted and now we hope farmers will end their agitation and return back to their villages. Prime Minister Modi’s message is very loud and clear that the government is ready to soften its stand for the interest of farmers, farmer’s welfare is the priority of this government,” he said.

The saffron party leaders feel that now its leaders in Punjab will not face violent protest and attack while participating in political activities.

The BJP, which is hoping to revive its fortune in Punjab, is fighting the election with former Chief Minister Amarinder Singh.

Currently, the BJP is all set to contest the Punjab polls after its one of the oldest ally Shiromani Akali Dal (SAD) broke alliance over three farm laws.

A senior party functionary said that repeal of three farm laws have paved the way for alliance with Amarinder Singh’s party.

Earlier, Singh had said, “Hopeful of a seat arrangement with the BJP in 2022 Punjab Assembly polls if farmers protest is resolved in farmers’ interest.”

The party also feels that the decision to repeal the laws will also bring back Jats, who actively participated in farmers agitation, to the BJP.

“We know that the fate of all the Lok Sabha seats of Haryana, Rajasthan and Western Uttar Pradesh is decided by the Jat community, which is crucial for formation of the government at the Centre. Hope this decision helps us to win back the support of the Jat community once again in these 40 Lok Sabha seats,” a senior party leader said. (IANS)