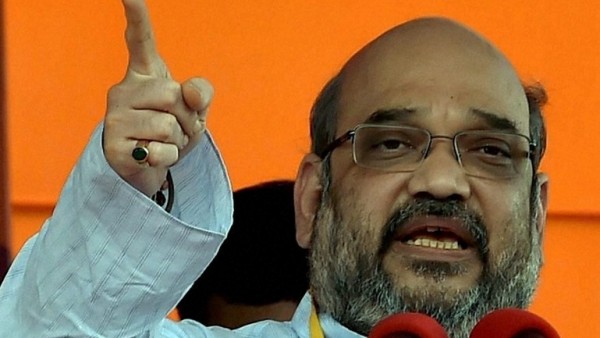 UP next: Amit Shah getting ready.

From 'sabka saath, sabka vikas' to 'ghar wapasi' to 'kisan ke liye bhajpa', the Bharatiya Janata Party's credos are changing fast as it braces for the Uttar Pradesh assembly polls scheduled for early 2017. Farmers and their plight will be at the helm of an "all out offensive" against the Samajwadi Party (SP) government of Chief Minister Akhilesh Yadav, insiders say.

At a recent ‘manthan’ post-Holi at Chitrakoot, mandarins of the state unit discussed a host of likely poll issues and zeroed in on the farmers, an issue that many felt was the best bet. This is especially so with the state’s farmers no longer favourably disposed towards the “otherwise pro-farmer” ruling Samajwadi Party (SP).

“We in the BJP have always favoured a rainbow of voting segments, but yes, from now on, we will take up farmers’ issues more vocally,” a senior BJP leader said.

Rattled at the onslaught in parliament over the land acquisition bill and being stamped anti-farmer by opponents, the new strategy being devised in Uttar Pradesh, a state crucial politically for both the BJP and other politiccal parties, is to begin a pro-farmer campaign, sources say. And the BJP, which has 47 members to the SP’s 224, has already fired the first salvo in the 403-member state assembly.

Accusing the Akhilesh Yadav government of turning a blind eye to the problems faced by farmers, especially after the recent rains and hailstorms that extensively damaged crops and led four farmers in different regions to commit suicide, BJP legislators have been creating a furor on the floor of the house.

The rains have devastated crops like mustard, wheat, pulses and potatoes and the BJP’s state leaders have been asked to highlight this issue and the lack of adequate compensation. “Contrary to claims of being a pro-poor and farmer-friendly government, there is no proper package or immediate relief,” a senior BJP legislator said.

The BJP has also set out to inform the farmers that while a much higher compensation under these conditions was given in BJP-ruled states like Madhya Pradesh, the Uttar Pradesh government is still confused about its action plan.

The SP, however, terms this a “desperate attempt and false propaganda of the BJP, whose fortunes are on the ebb in the state”.

“The very next day after the rains, the chief minister himself issued directives to all district magistrates to assess the damage to crops and the revenue department has been asked to ready a relief package on the basis of the survey,” cabinet minister and SP spokesman Rajendra Chowdhary said.

The state government had rolled out several welfare schemes and these included free irrigation facilities for farmers.

Meanwhile, a section of BJP leaders, including state unit president Laxmikant Bajpayi, have been tasked by the party’s national think tank to highlight the plight of cane growers in western UP. Bajpayi, a legislator from the region, says that arrears to cane farmers have touched an astounding Rs. 7,000 crore even as the state government appears to favour the sugar mill owners.

Referring to a sugar mill in Bulandshahr, some 410 km from state capital Lucknow, to buttress his allegation, Bajpayi said it was given away at a throwaway price of Rs.29 crore while its land cost itself was a whopping Rs.600 crore.

“Over and above this, the government has added insult to injury by fixing just Rs.280 per quintal as the minimum support price,” Bajpayi said. “We will never allow the state government to ruin the future of the farmers by its lopsided and anti-farmer policies,” Bajpayi added.

Senior SP leader and cabinet minister Ambika Chowdhary said “all the noise” made by the BJP on farmers issues was falsehood. “The entire country now knows that the BJP is only for corporates and industrialists as this is a government which is now trying to usurp the land of farmers by pushing for the land acquisition bill,” Chowdhary said.

(The Lok Sabha on Tuesday passed the contentious land acquisition bill amid a walkout by opposition parties even as the government moved nine amendments to address concerns raised by farmers and civil society activists. The proposed legislation removes the need for obtaining the consent of land-owners and carrying out Social Economic Assessment (SIA) for acquiring land under certain categories – precisely the provisions which had raised the heckles of critics.)

And so, while what good this sparring between the SP and the BJP would do to the farmers remains to be seen, it is certain that they are going to be the pivot as the saffron party braces itself for Mission 2017. (IANS)