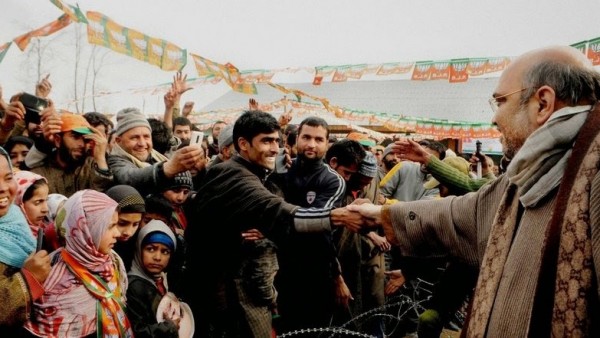 BJP extends a saffron hand in the Valley.

BJP president Amit Shah hit out at the Omar Abdullah government in Jammu and Kashmir for its "slow" rehabilitation process after the September floods and alleged mismanagement of central relief funds, while promising his party would make the state the best in the country, if voted to power.

“Government of India provided Rs.1,700 crore special assistance to the state government for the rehabilitation of flood victims. But I want to ask Omar Abdullah where the money went. Wherever I have been in Kashmir, people have complained about inadequate response of the state government,” Shah said at a Bharatiya Janata Party poll rally here.

He said many states of the country have progressed but Kashmir has remained behind because of “family-run” parties.

“In 2014 parliamentary elections, BJP gave the slogan of ‘Congress-mukt Bharat’ (Congress-free India), similarly in Jammu and Kashmir, we appeal to people to free themselves from regional National Conference and Peoples Democratic Party as Congress supports either of them to be in power.

“You have tested all of these parties in the last 60 years; they have given you nothing but poverty and unemployment. Trust (Prime Minister Narendra) Modiji and we assure you will never be betrayed,” Shah said, calling on people to vote for change.

“If Jammu and Kashmir wants to be a part of the development mantra of Prime Minister Modi, people here should vote BJP to power. We will make Kashmir most progressive state of the country,” he said.

He, however, was quick to add that central government would continue to provide assistance to the state whosoever forms government in the state.

“Every year Rs 8,000-10,000 crore rupees as funds from the centre go to Jammu and Kashmir, but politicians here have been playing with emotions of people in the last six decades and have done nothing for the state,” he added.

He said some people are spreading fear among people about BJP’s plans. “But let me tell you, we have no other ambition than providing better governance in the state and provide electricity to every home, and improve the infrastructure here. We will make Kashmir the crown of India.”

Shah said the BJP is not banking on Hind-Muslim divide but rather wants peace, development and better tourism related facilities in the state. “For that when you will go to poll booths, press the lotus button (BJP’s poll symbol) so hard that its effect is felt everywhere.

“We (BJP) have a blueprint for the development of Jammu and Kashmir.. for it to be implemented we need to be in power here. You have given chance to everyone, now time has come that you give us one chance and we promise you won’t be cheated,” he said.

The BJP president was accompanied by party senior leaders and candidates it has fielded for Srinagar district which goes to poll Dec 14 in the fourth of the five-phase assembly elections. (IANS)