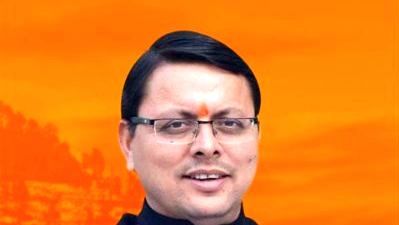 Ahead of next year's assembly polls, the BJP tries to woo young voters and strengthen its base in the Kumaon region by electing Pushkar Singh Dhami as the new chief minister of Uttarakhand.

“He has a close relationship with the Defence Minister Rajnath Singh also,” he said.

“This is the first time the Kumaon region has been given proper importance by the party and it will help us in next year’s assembly polls,” he said.

Dhami worked in different positions in the students wing of the RSS — the ABVP, for almost a decade and was active in student politics in Lucknow. He also served as president of BJP youth wing in Uttarakhand for two terms.

Dhami was elected as new chief minister of Uttarakhand in the meeting of the BJP’s legislature party in Dehradun. Election of new chief minister was held in presence of central observers — Union Agriculture Minister Narendra Singh Tomar and party national general secretary D. Purandeswari. BJP in-charge for Uttarakhand Dushyant Gautam was also present in the meeting.

Dhami replaced Tirath Singh Rawat, who on Friday late evening submitted his resignation to Governor Baby Rani Maurya. Rawat, a Lok Sabha member from Garhwal Lok Sabha seat, and as per the rules, needed to be sworn in as an elected MLA within six months of taking over as the chief minister, but that did not happen. (IANS)