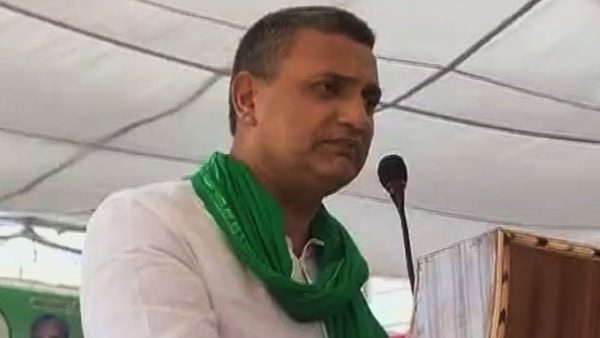 Raging a controversy, Bihar Agriculture Minister Sudhakar Singh has claimed that there are many ‘thieves” in his department, and he is the “sardar” of them.

The minister in Nitish Kumar government further claimed that there are many other “Sardars” above him too. Addressing a public meeting in Kaimur, Mr Singh attacked the Nitish Kumar-led coalition government in Bihar.

“There is not a single wing of our (agriculture) department that does not commit acts of theft. As I am the in-charge of the department, I become their Sardar. There are many other chieftains above me too. The government has changed, but the working style remained the same. Everything is the same as before.”

He alleged that Bihar State Seed Corporation embezzled around ? 200 crore in the name of giving relief to farmers.

“The farmers who had to cultivate good quality paddy, do not take paddy seeds of Bihar State Seed Corporation. Even if they take it for some reason, they do not put it in their fields. Instead of giving relief to the farmers, the seed corporations steal ? 100-150 crore.”

Singh further attacked Janata Dal (United) MLA from Chainpur and the Minority Affairs Minister Mohammad Jama Khan saying that the latter had been a minister in the government even before but the condition of the people in the region hardly changed.

“Now there are two ministers from the district. Even after that, if the situation does not change, then what is the benefit of becoming a minister? Kaimur district is full of corrupt officials.”

There are allegations of rice scam while he was a minister in Nitish Kumar’s cabinet in 2013.

After Singh took over as Minister in the new Magagathbandhan government, the Bharatiya Janata Party (BJP) attacked the coalition over the matter.

“They should see the court’s order in the matter. Allegations are always made but not always true. The scam, if happened, happened under their rule. Why did not they take this up then?” Singh said on BJP taking him up for a rice scam case against him.