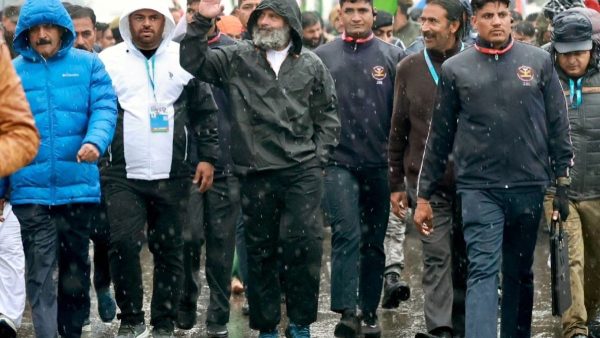 Rahul marches on in rain in Jammu.

Five years ago, Kathua had heard calls for Hindus to unite behind child rapists. On Friday, it resounded with cries for India to unite against hate.

Tricolour-waving crowds had hit Kathua’s streets under the banner of the Hindu Ekta Manch in 2018 in support of men accused of raping and murdering an eight-year-old Muslim girl.

As Rahul Gandhi walked down the same streets along with a band of committed supporters on Friday, leading the Bharat Jodo Yatra, thousands of men, women and children swarmed to greet him.

Women showered flower petals on the marchers at some places amid the chanting of slogans against hate. Rahul did encounter a few public expressions of antagonism. A family perched atop a house waved placards mocking him as “Pappu”. He reciprocated with a broad smile.

Local BJP leaders appeared nervous, ringing up journalists all day to ask about the sizes of the gatherings at various places on Rahul’s route. The Congress leader, who had entered Jammu and Kashmir on Thursday evening, walked nearly 20km from Hatli Mork Chowk to Chadwal amid moderate rain.

The weather prompted Rahul, who has covered more than 3,000km of the Yatra so far in just a T-shirt, to briefly throw on what the Congress said was a raincoat.

Traffic on the Jammu-Delhi highway was diverted and hundreds of security personnel were deployed. The region has witnessed a resurgence of militancy in recent weeks. Among the hundreds who joined the Yatra in Jammu was Captain Bana Singh, hero of the 1987 Siachen battle and recipient of the country’s highest gallantry award, the Param Vir Chakra.

Shiv Sena leader Sanjay Raut flew in from Mumbai to express support. Kathua has a sizeable population of Muslim Gujjars as well as Bakerwals, the community to which the brutalised eight-year-old girl belonged. A large number of Gujjars, some waving the national flag, flocked to the Yatra in support. Mohammad Munir from Barnoti village explained why he had come.

“Our ordeal continues. We are extremely worried at a new government order (announcing the removal of encroachments from State land). We have been living on this land for generations. Where will we go if we are evicted?” he said.

“We believe the rally (Yatra) will bring change to the country and to our state (Union Territory) so that people continue to live like they did in the past.”

But many said that support for the BJP remained intact in Jammu, adding that the deep religious fault lines would not be easy to bridge. “The BJP faces massive anti-incumbency in Jammu but the people believe they have no alternative. When there is voting, the Kashmiris will vote against the BJP and the Dogras will vote for it,” said a farmer in Hamirpur who had voted for the BJP in all recent elections. Rahul will hoist the national flag at Banihal in Jammu’s Ramban district on January 25 before entering the Valley on January 27. The Congress had initially invited Choudhary Lal Singh, who had as a BJP minister rallied behind the rape accused in 2018 but has since floated his own party, to join the Yatra in Jammu.

But it snubbed him after Congress spokesperson Deepika Poshkar resigned in protest. Congress sources said Singh had been told quietly to stay away.

The eight-year-old girl was confined to a temple in January 2018 and raped by the priest and others for three days before being bludgeoned to death. The motive was apparently to drive the nomadic Bakerwals out of the area