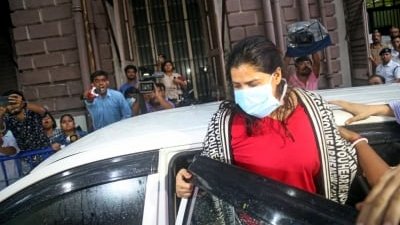 Arpita outside the ED office.

The School Selection Commission (SSC) scam in West Bengal came to national limelight after the Enforcement Directorate (ED) unearthed nearly Rs 50 crore in hard cash from Arpita Mukherjee’s residence. Arpita Mukherjee is believed to be a close confidante of Partha Chatterjee, a trusted lieutenant of Chief Minister Mamata Banerjee, a former state education minister and the current minister of commerce and industries. He is under arrest, as is Mukherjee. The matter is being probed by ED as well as the Central Bureau of Investigation (CBI). After the formation of the Trinamool Congress (TMC) government in the state in 2011, a serious breach in protocol was noticed in the Regional Level Selection Test (RLST) of 2012 -- a teacher recruitment process, when ranks, according to the combined merit panel, were jumped and lower ranked candidates were recruited as teachers. Many candidates who were at the receiving end of the selection board's “irregularity” knocked on the doors of the court. As of now, related litigations are still pending in Supreme Court.

In the wake of the two consecutive recoveries of massive amounts of cash and gold from two of her residences in Kolkata’s Tollygunge and Belgharia, Arpita Mukherjee on Thursday confessed to the Enforcement Directorate (ED) that she was forced by West Bengal Minister Partha Chatterjee to allow her houses to be used to store the illegal cash.

According to ED sources, Mukherjee also admitted that the cash recovered from her residences was parked there by Chatterjee with the help of one of his close associates unknown to her.

“She has confessed that Chatterjee used to come to both her Tollygunge and Belgharia residences once or even twice a week, and during his visits, he was accompanied by a person unknown to her. Mukherjee has also confessed that she did not even have access to the keys of the cupboards from where the cash recoveries were made. There were strict instructions from Chatterjee not to fiddle with the cupboards and also avoid frequenting the rooms where these cupboards were,” an ED official confirmed.

It is learnt that whenever Chatterjee visited Mukherjee’s residences, the minister had closed-door meetings with the unknown person which she was not allowed to participate in.

“While making these confessions, Mukherjee broke into tears a number of times and was constantly claiming that she was exploited. Now we have to get access to that unknown person referred by her. It is only Partha Chatterjee who can answer this,” said an ED official.

Meanwhile, the Trinamool Congress leadership is under immense pressure from within the party to relieve Partha Chatterjee of his ministerial and party posts with immediate effect.

“Partha Chatterjee should be removed from ministry and all-party posts immediately. He should be expelled. If this statement considered wrong, party has every right to remove me from all posts. I shall continue as a soldier of AITC official,” Trinamool Congress state general secretary and party spokesman, Kunal Ghosh said in a tweet.

Without naming the minister, youth Trinamool Congress leader Debangshu Bhattacharya said in a social media post that “it is better to puncture that boil to give the body a relief”.

Meanwhile, the Enforcement Directorate has recovered Rs 27.90 crore and six kg gold from
another house of Arpita Mukherjee.

Soon after the ED sleuths on Wednesday evening witnessed the bundles of cash in Rs 500 and Rs 2,0000 denominations in the cupboard of the bedroom in Arpita’s Belgharia flat on the northern outskirts of Kolkata, they guessed that that the cash stacked here might be much higher than what was recovered from her Diamond City residence.

“So, we did not take the risk and requested jumbo currency counting machines which can count more notes at one go. Our request was adhered to and soon officials from State Bank of India reached with four such jumbo currency counting machines which can count 1,000 notes at one go and in a minute. Still, it took till early Thursday morning to complete the counting process as well as loading them in the steel trunks,” the official said.

“In addition to that, we have also recovered around six kg of gold, in the form of bars and ornaments, valued at more than Rs 4 crore. So total cash recovery from the two flats of Arpita Mukherjee amounts to Rs 49.10 crore,” the official said.

Several silver coins have also been recovered from the Belgharia residence, the market value of which is yet to be ascertained.

The officials said that the total cash recovery from the Belgharia residence of Arpita Mukherjee has been recorded at Rs 27.90 crore, as against Rs 21.20 crore recovered from her Diamond Park residence.

On the huge cash and gold recovery, party spokesman Kunal Ghosh said that whatever is happening is a matter of grave concern and really very shameful.

“However, I am sure that the party leadership is keeping a close watch on the entire development and will take the appropriate decision at the right time,” Ghosh said.

Leader of the opposition in the state assembly Suvendu Adhikari said that even after this huge cash recovery if Chief Minister Mamata Banerjee does not remove Partha Chatterjee from the Cabinet, it will be evident that the share of the illegal cash is not just restricted to Partha Chatterjee.

Partha Chatterjee was arrested in connection with the alleged irregularities in the recruitment of teachers and non-teaching staff in government schools when he was the state education minister.

The Enforcement Directorate (ED) officials on Wednesday recovered Indian currencies worth over Rs 20 crore and three kg of gold bars from the one of the residences of Arpita Mukherjee at Belgharia in the northern outskirts of Kolkata.

ED officials on Wednesday had recovered Indian currencies worth over Rs 20 crore and three kg of gold bars from the one of the residences of Arpita Mukherjee.

ED sources said that the counting process is still on and so far, cash worth Rs 20 crore have been recovered from a cupboard at the bedroom of the residence.

“The currencies recovered were in Rs 500 and Rs 1,000 denominations. The counting is still on and we expect that the amount finally will be somewhere near the amount of Rs 21.20 crore from Arpita Mukherjee’s residence at Diamond Park Housing Complex at Tollygunge in South Kolkata. At the same time, we have recovered three kg of gold mostly in the form of bars and some in the form of ornaments,” said an ED official.

On Wednesday evening, ED sleuths, escorted by central armed forces personnel, broke the entry lock of Mukherjee’s residence and on opening the cupboard of a bedroom, the agency sleuths came across bundles of India currencies separately in Rs 500 and Rs 2,000 denominations.

The ED sleuths immediately contacted the Reserve Bank of India’s regional office in Kolkata for help in counting the notes.

Within half-an-hour, four officials of State Bank of India arrived with four jumbo currency counting machines capable of counting 1,000 notes at a go.

“The counting will take some more time and we hope to complete the process by this night. There are two flats owned by Arpita Mukherjee in this housing complex. In the first flat, which has been purchased recently and was more or less empty, we did not get anything. But in the second flat, we came across such huge cash and gold,” the ED official said.

Soon after that recovery, first Partha Chatterjee, currently the state Commerce & Industries Minister, was arrested first on July 23 morning and then Arpita Mukherjee in the afternoon on the same day. (IANS)