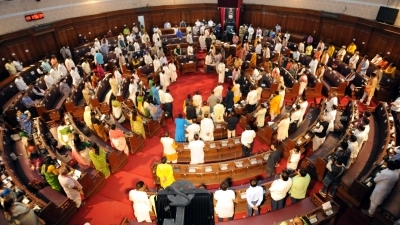 A motion on the hyperactive conducts by the central agencies in the state was passed in the West Bengal assembly by the ruling Trinamool Congress on Monday by 189:64 votes. First the motion was passed by a voice vote and after the opposition insisted on a division in the matter a voting by open-ballot took place.

Participating in a discussion in the matter, Chief Minister Mamata Banerjee, while launching a scathing attack against the Leader of the opposition in the West Bengal assembly, Suvendu Adhikari, said that the Prime Minister Narendra Modi might not be aware of the “excesses” on part of the central agencies in the state.

“The Prime Minister might not be aware. It is all the game plan of the state BJP leaders. I have no objection to central agency activities against corruption. But the rule should be the same for everyone. It is not right that the BJP leaders should be spared,” the Chief Minister said.

The Chief Minister became furious after in the midst of her speech a comment was passed claiming that all in Trinamool Congress are thieves. “I challenge you to prove it. We are not thieves like you. You claim yourself to be a clean person. But I know how many petrol pumps you own. I am aware of your collection of diamonds. Let the central agencies like ED and CBI raid your residence. We will also stay there and show the central agency officers where your treasures are hidden,” the Chief Minister said.

The Leader of the Opposition did not react within the House. However, later he told the media persons that the manner and language in which the Chief Minister launched a personal attack on him on the floor of the House was unthinkable in the history of West Bengal assembly.

“Starting from Late Jyoti Basu to Buddhadeb Bhattacharya, no chief minister has done this. The chief minister might have forgotten the decorum and norm of legislative courtesy. But we in BJP cannot react in the same manner. She has threatened me. But I am not scared. Previously, the state police had tried to harass me several times. But they could not do anything,” the Leader of the Opposition said.

Barring those moments of excited outburst by the chief minister, the entire process of debate on the motion was otherwise peaceful, with the entire opposition bench participating in the debate without staging a walkout. (IANS)