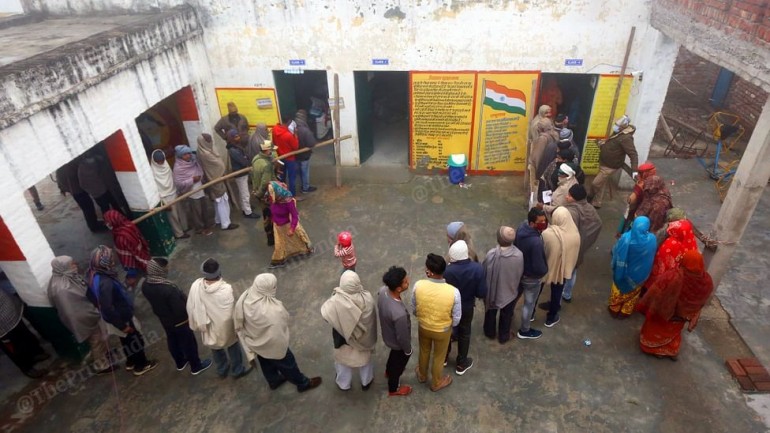 UP ready for fourth round.

The stage is now set for the fourth phase of polling in Uttar Pradesh in which 59 Assembly constituencies, spread across nine districts, will go to polls on February 23.

A total of 624 candidates are in the fray for 59 Assembly seats. The maximum number of candidates is 15 in Sawayajpur in Hardoi while a minimum of six candidates each, are contesting for two seats, including Palia in Lakhimpur and Sevata in Sitapur.

In the fourth phase, polling will be held in Rohilkhand, Terai region, Awadh and Bundelkhand regions.

In the elections held in 2017, the BJP had won 51 of 59 seats. One seat was won by its ally Apna Dal (S). Four were won by SP, while two seats were won by the Congress and two by the BSP.

In this phase, voting is also taking place in state capital Lucknow which has nine Assembly seats. Of these, eight are with the BJP.

Polling is also scheduled to be held in this phase in Lakhimpur Kheri which has become a focal point of the farmer movement, especially after the October 3 incident in which four farmers were mowed down by an SUV owned by union minister Ajay Mishra Teni’s son Ashish Mishra.

The opposition has been constantly targeting the BJP on this incident and Mishra’s release has further stoked the fire.

This phase is crucial for the BJP which faces the challenge of retaining its 51 seats. The party is facing resistance in the Terai region where BJP MP Varun Gandhi has been speaking up on issues against his own party. Varun is MP from Pilibhit, a farmer dominated constituency.

Then the party faces hostile voters in Lakhimpur where the opposition is refusing to let the October incident fade from public memory.

For the Congress, the biggest challenge of these elections comes from Rae Bareli that also goes to polls this week. Both the Congress MLA, Aditi Singh and Rakesh Singh, have turned rebels and joined the BJP.

Rae Bareli is the parliamentary constituency of Congress president Sonia Gandhi and the party will face major embarrassment if it fails to win seats here. (IANS)