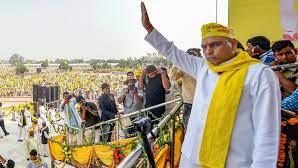 He prides himself as a king maker and also a 'king breaker' but the Suheldev Bhartiya Samaj Party (SBSP) chief Om Prakash Rajbhar, is himself facing a tough time in his Zahoorabad Assembly constituency.

The BJP has fielded two-time former MLA Kalicharan Rajbhar to cut into the Rajbhar votes and now the BSP has made it tough by fielding former SP Minister Sayyeda Shadab Fatima as its candidate from the constituency.

Fatima, considered a powerful minister in the SP government, had joined forces with Akhilesh Yadav’s uncle Shivpal Yadav after the two parted ways.

She was denied a ticket by Akhilesh Yadav and she quit the SP announcing that she would contest as an independent when the BSP stepped in and made her its candidate.

Fatima who lost the 2017 election, is confident winning this time.

“People have seen through the BJP and will not vote for it this time. I am confident of my victory,” she says.

Om Prakash Rajbhar, on the other hand, claims that his victory is a foregone conclusion.

“People know that I am decimating the BJP in these elections and I will win with a huge margin,” he adds. (IANS)