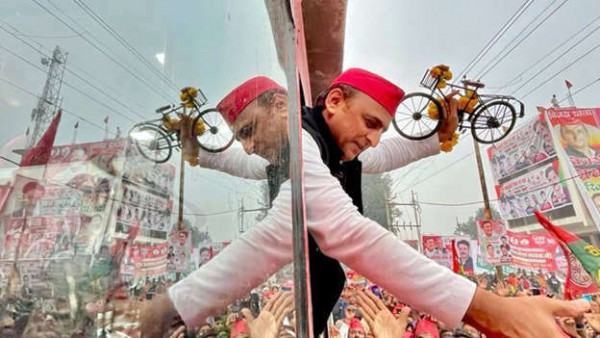 Akhilesh on the move.

Samajwadi Party president Akhilesh Yadav, on the upbeat in Uttar Pradesh as the state gets ready for elections announces he will ensure minimum support price for all crops for farmers after his party comes to power. He said that he will create a revolving fund to ensure payment of cane dues besides making adequate arrangements for ensuring free irrigation, loan, pension and insurance for farmers. Further, he will withdraw all cases lodged against farmers and the families of those who died during the year-long agitation will be given Rs 25 lakhs each.

Yadav said that all this would be included in the Samajwadi manifesto which would be released after the BJP released its manifesto.

Farmer leader Tajinder Virk, who was among those injured in the October 3, 2021 Lakhimpur incident, administered a pledge with fistful of wheat and rice to defeat ‘those who had heaped atrocities on farmers.’

Comparing the Lakhimpur incident with the Jallianwala Bagh massacre, Akhilesh Yadav said that by mowing down innocent farmers, the BJP had committed an unpardonable crime.

He said that it was the unity of farmers that had forced the BJP to take back the farm laws.

The SP president further said that the BJP and its leaders had been openly violating the model code of conduct. He said that he would soon lodge a formal complaint with the Election Commission and hoped that they would take action accordingly.

Replying to a question on failure of alliance talks with Bhim Army chief Chandra Shekhar, Akhilesh Yadav said that he had offered two seats but does not know why the same was turned down.

“Chandra Shekhar should know that Dr Ambedkar and Dr Lohia worked together and he should also work together in a positive spirit with us and as a brother,” he said.

Even as Bharatiya Kisan Union (BKU) president Naresh Tikait has announced support towards the Samajwadi Party-Rashtriya Lok Dal (SP-RLD) alliance in the upcoming Uttar Pradesh Assembly polls, his brother and BKU spokesperson Rakesh Tikait has denied this, saying “there was a misunderstanding”.

“We didn’t extend any support, people have made a mistake in understanding,” Rakesh Tikait said.

A video of Naresh Tikait extending support to the SP-RLD has recently emerged. On being asked on this, Rakesh Tikait said: “We have not extended any support yet and we will soon confirm that through our official social media account as well.”

“If someone comes to our house, we say ‘we are with you’. We are not telling anyone whom to vote.

“We have decided that we will not support anyone. Even if we are against the government, everyone (the people) knows what they have to do,” he said.

Ahead of the Uttar Pradesh assembly elections, the SP-RLD alliance, Congress, SP and Bahujan Samaj Party have released the list of their candidates.

The SP-RLD alliance has announced the candidature of Rajpal Baliyan from Budhana in Muzaffarnagar district, Chandan Chauhan from Meerapur and Ashraf Ali from Thana Bhawan in Shamli.

On January 15, the Samyutk Kisan Morcha had decided to start Mission UP from February 1.

The RLD and Samajwadi Party alliance on Saturday announced its second list of seven candidates for the assembly elections.

In this list, all the candidates belong to the RLD. On Thursday, the first list of 29 candidates was released in which the Samajwadi Party has named its 10 candidates while RLD has been given 19 seats.

The RLD candidates have been announced in 26 seats so far. (IANS)