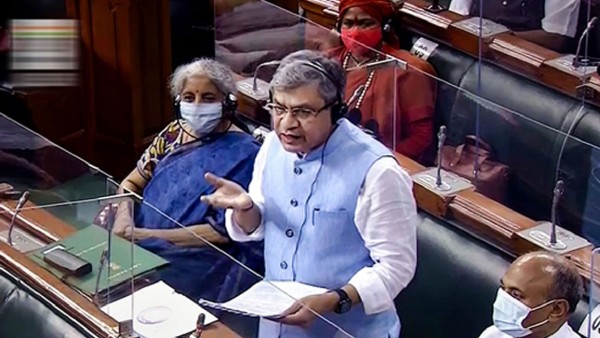 IT Minister in Parliament.

The government will not back down from putting up a strong defence in the Pegasus spyware scandal. After the news website The Wire reported that phone numbers of Indian journalists were on the hacking list of an unidentified agency using the Pegasus software, made by the Israeli firm NSO Group, the Centre has stuck to its earlier position that no unauthorised interception has taken place. "We have nothing to fear and the government has nothing to hide. We will reply to any query. The news article proves nothing. In fact, previous attempts to link Pegasus with the government have failed," the Ministry of Electronics and Information Technology (MeitY) maintained.

A day after media reports of alleged spying of journalists and other personalities of the country with Pegasus spyware surfaced, the Union Information and Technology Minister Ashwini Vaishnaw, while replying on behalf of the government to the questions of the opposition in the Lok Sabha, rubbished the reports of espionage.

He said it is an attempt to malign Indian democracy.

IT Minister Ashwini Vaishnaw said by logic, the website only tried to create sensation through baseless news reports. If the members pay proper attention to the news, then they themselves will understand this, he said.

The Union Minister said, “NSO has also said that the report is false and baseless. Any kind of illegal surveillance is not possible in our system. This media report coming a day before Parliament session is not a coincidence.”

The minister was making a statement on the Pegasus project reports, published in The Wire, which showed that over 300 phone numbers – including those of two serving ministers, over 40 journalists, three opposition leaders among others could have been targeted for hacking through Pegasus spyware.
The government said that allegations of surveillance on specific people has no concrete basis or truth associated with it whatsoever.

In response to journalists’ queries on snooping of prominent citizens, Additional Secretary, Electronics and Information Technology, Rajender Kumar said: “India is a robust democracy that is committed to ensuring the right to privacy to all its citizens as a fundamental right. In furtherance of this commitment, it has also introduced the Personal Data Protection Bill, 2019 and the Information Technology (Intermediary Guidelines and Digital Media Ethics Code) Rules, 2021, to protect the personal data of individuals and to empower users of social media platforms.”

“The commitment to free speech as a fundamental right is the cornerstone of India’s democratic system. We have always strived to attain an informed citizenry with an emphasis on a culture of open dialogue.

“Government of India’s response to a Right to Information application about the use of Pegasus has been prominently reported by the media and is in itself sufficient to counter any malicious claims about the alleged association between the Government of India and Pegasus,” he added.

He stated that the questionnaire sent to the Government of India indicates that “the story being crafted is one that is not only bereft of facts but also founded in preconceived conclusions”.

“It seems you are trying to play the role of an investigator, prosecutor as well as jury,” he wrote.

He pointed out that answers to the queries posed have already been in public domain for a long time, and it also indicates poorly conducted research and lack of due diligence by the media organisations involved.

He held that in India there is a well-established procedure through which lawful interception of electronic communication is carried out in order for the purpose of national security, particularly on the occurrence of any public emergency or in the interest of public safety, by agencies at the Centre and states.

“The requests for this lawful interception of electronic communication are made as per relevant rules under the provisions of Section 5(2) of Indian Telegraph Act,1885 and Section 69 of the Information Technology (Amendment) Act, 2000,” the official said.

He mentioned that India’s Minister of Electronics & IT has also spoken in detail, including in the Parliament, that there has been no unauthorised interception by Government agencies.

“It is important to note that government agencies have a well-established protocol for the interception, which includes sanction and supervision from highly ranked officials in Central and state governments, for clear stated reasons only in national interest. The allegations regarding government surveillance on specific people has no concrete basis or truth associated with it whatsoever,” he said.

He further mentioned that in the past, similar claims were made regarding the use of Pegasus on WhatsApp by the Indian state and those reports also had no factual basis and were categorically denied by all parties, including WhatsApp in the Indian Supreme Court.

“This news report, thus, also appears to be a similar fishing expedition, based on conjectures and exaggerations to malign the Indian democracy and its institutions,” he said. (IANS)