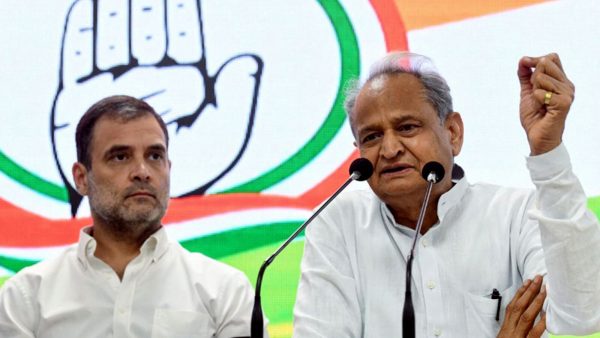 Sources close to Ashok Gehlot say he may file his papers on Monday to run for the October 17 election, but he is still hoping to persuade Rahul Gandhi to return as chief.

The Congress will launch its mega election for a new party president, the first in over 20 years, on Thursday and Shashi Tharoor is set to run after a no-objection from Sonia Gandhi. Ashok Gehlot, the Chief Minister of Rajasthan, is tipped to be his rival, but he is reportedly not ready.

Sources close to Ashok Gehlot say he may file his papers next Monday for the October 17 election.

The Congress veteran, who has weathered many a threat including an alleged BJP “Operation Lotus” and rebellion on his watch, has repeatedly been asked to take charge by Sonia Gandhi, who has been interim chief since her son Rahul quit in 2019 following the party’s second straight election defeat.

But the 71-year-old is concerned about ceding the Chief Minister’s job to his rival Sachin Pilot, sources say.

If he has to move to national politics, say sources, he wants a loyalist to rule as his proxy in Rajasthan. If not that, he may insist on keeping both roles by taking over as working president of the Congress.

Sachin Pilot’s arrival in Delhi yesterday triggered speculation that he may be closer to getting what he has wanted for years – a shot at being Chief Minister of Rajasthan, at least for a year before the state votes for a new government.

A section in the Congress believes that Sachin Pilot should be given a chance before the election. But it all hinges on Gehlot and what he will finally agree to do.

Before filing his nomination papers, Gehlot hopes this week to try and persuade Rahul Gandhi to return as chief.

Rahul Gandhi is the Chief Minister’s “first choice” for the top party post, the sources say.

The Congress will accept nominations till September 30. The elections for Congress president, if needed (if there are more than one candidate), will be held on October 17. The results will be declared on October 19.