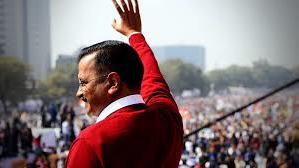 Successful startups learn lessons from their setbacks, and Kejriwal appears to have done the same. He is back to focusing on smaller groups of electorates (users) with specific grievances (burning needs), instead of pitching his message at a larger ideological level. If anything, AAP has emerged as an ideology-neutral party, which is almost like a service-provider: you elect it to provide certain material services, such as education, health, ration and Wi-Fi, and if elected, the party will provide those services like any corporate entity which tries to maximise customer satisfaction to expand its own market share.

I spent a lot of time over the past couple of months reading books and watching videos produced by startup gurus. One thing they all say startup founders must do is to begin lean: focus on a burning problem that people want solved, find a way to solve it, identify a few early adopters to use your product, service them personally, get their constant feedback and regularly tweak your product to improve user experience. In fact, there is a name for early versions of a startup’s product – a “Minimum Viable Product” or an “MVP”. Most successful startup founders say that the most important word here is “minimum”, followed by “viable”. Make the first usable version of your product available to customers – it most likely won’t be great, but it must be viable.

I am a late-comer to these mantras, but Arvind Kejriwal practically invented them entirely on his own. Well before startup talk flooded the internet, Kejriwal had implemented its rules in his political startup AAP. In fact, he had already tested them out in his original avatar as the brains behind the “Anna Movement”. Team Anna found a thing that everyone considered to be India’s biggest problem – corruption in high places, came up with a solution called “Lokpal”, and pushed out a rough-and-ready MVP called “India Against Corruption” to get as many early adopters as possible. And as startup gurus say, the best way to spread the word about your product is to get users to like it. The “Anna Movement” went viral like nothing before.

Kejriwal did the same thing with AAP. He took one burning problem that people in Delhi’s tenement colonies faced, that of high electricity bills, and came up with an MVP for that – disconnect the meters. You could legitimately say that I am stretching the analogy here. But that is why it is an analogy for a product, not the real thing. It didn’t solve the problem of high bills, but it did bring the issue to the media’s notice. And that is what Arvind Kejriwal’s MVP had set out to achieve. He had emerged out of the shadow of Anna Hazare when many said he would not be able to stand on his own. By pulling the electricity meter ‘stunt’, he managed to convince his ‘users’ that he was on their side and could be trusted to deliver.

The Kejriwal story parallels startups in another way. In many successful startups, one amongst a group of co-founders acquires the dominant position: Facebook is a prime example. This is exactly what happened in AAP. And like many startups, AAP let its early success in 2013 go to its head. The party spread itself too thin, contesting 432 seats in the 2014 Lok Sabha election, and Kejriwal himself wasted crucial party resources in his doomed contest against Narendra Modi in Varanasi. AAP broke all records in Delhi the very next year, but soon ended up spending too much time and energy on internal reorganisation instead of its MVP. In the process, AAP performed way below expectations in the state elections it fought over the next few years.

Successful startups learn lessons from their setbacks, and Kejriwal appears to have done the same. He is back to focusing on smaller groups of electorates (users) with specific grievances (burning needs), instead of pitching his message at a larger ideological level. If anything, AAP has emerged as an ideology-neutral party, which is almost like a service-provider: you elect it to provide certain material services, such as education, health, ration and Wi-Fi, and if elected, the party will provide those services like any corporate entity which tries to maximise customer satisfaction to expand its own market share.

This model has the possibility of traction because it occupies one of the two dominant strands in India’s contemporary public-culture. The first is that of extreme-nationalism as a unifying identity across India. In this, the citizen embodies the values of the hard-state, which today has also coalesced in a majoritarian ideology. This space is overwhelmingly occupied by PM Modi and the BJP. The second is a culture of transaction that represents the growing spread of the market-mechanism. Here, a citizen gives a vote, and takes a governmental service. It is contingent on the efficiency and ideological disinterest of the governmental service provider (“we will vote for you, as long as you ignore our majoritarian bigotry and provide good schools”). This is a perfect space for AAP to occupy. And. Kejriwal knows that the only way to expand in this space is by constantly displaying AAP’s efficiency as a service provider.

Where does Rahul Gandhi fit in with this scheme of things? The only space open is on the other side of power. Alongside those who have been disenfranchised by the operation of this new system of extreme-nationalist and transactional power. It is not just the minorities, but linguistic groups who feel left out by the surge of the Hindi belt, hitherto influential farmer groups who feel threatened by the door opened to corporate presence, caste groups who are miffed at the rise of the mercantile classes, strands of civil society who feel dismayed by the path taken by politics and culture, and various other groups who feel they don’t have access to power. They are disparate and dispersed, and can only be brought together through a long process of localized engagement.

Gandhi’s problem is the Congress party’s legacy. It is too much of a Leviathan to be an agile startup like AAP. The only saving grace for the party is that so many of its stalwarts have abandoned ship and left it at a wrecking yard. This is an opportunity for Gandhi to reimagine the Congress as a newborn entity that has to start from scratch. It can still think of itself as a startup and follow the rules of finding a burning problem, offering a solution, taking it to early adopters, working with them to iterate new and better versions of the product. The “Bharat Jodo Yatra” is one such opportunity, as long as it moves by building a chain of local issues, local solutions, and creating a suite of messages that can come together in one unified political app.

But like all startups, Rahul Gandhi’s new Congress will need funds at some stage. This means selling the idea of the Congress to those who have the moolah – corporates. There are today many corporates who will be watching the rise of two big houses with a degree of disquiet. While they would not overtly want to do anything that would tie them to the Opposition, they might still be willing to open channels with the Congress. Realpolitik demands that Gandhi recognises this and rolls back his anti-corporate rhetoric. Without that, his Congress will not succeed, whether or not it learns from Kejriwal and reinvents itself as a startup.