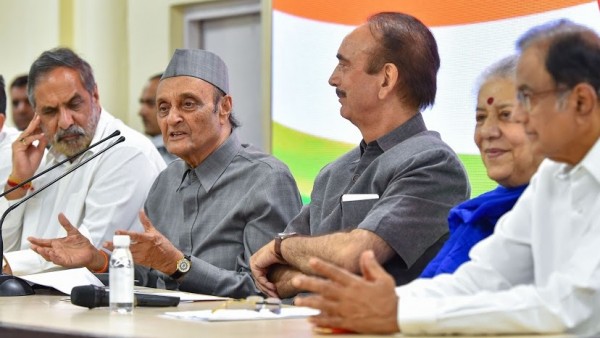 The Congress has submitted a list of star campaigners for the bypolls, which includes some prominent leaders from the G-23 list and Kanhaiya Kumar, who has recently joined the party.

Anand Sharma, who belongs to Himachal Pradesh, Bhupinder Singh Hooda, former Chief Minister of Haryana, and Raj Babbar are the three members of G-23, who have been included in the list.

Apart from them, Punjab Chief Minister Charanjit Singh Channi and Chhattisgarh Chief Minister Bhupesh Baghel are also in the list with Sachin Pilot and Navjot Singh Sidhu while Ashok Gehlot is excluded, sources said, adding that Gehlot is looking after the elections in Rajasthan.

The Congress is slated to hold a CWC meeting this month and ahead of the meet, the party has tried to reach out to the dissenters, who have demanded the meeting of the highest decision making body of the party.

Former Leader of Opposition in the Rajya Sabha Ghulam Nabi Azad had written for an early meeting of the Congress Working Committee (CWC). Azad in his letter had pointed out about the need for a permanent president and to discuss party affairs in the present scenario. He had reiterated his demand for organisational elections in the party.

Senior Congress leader Kapil Sibal had launched an attack on Rahul Gandhi and wondered who in the party was taking decisions. He said that the party leaders’ demand for organisational elections had not been met. Addressing a press conference in New Delhi, Sibal had said, “There is no president in our party, so we do not know who is taking all the decisions. We know it, yet we don’t know.”

The bypolls are going to be held in 15 states and union territories, including Madhya Pradesh, Bihar, Haryana, Maharashtra, Himachal Pradesh and West Bengal on October 30 and the counting of votes will take place on November 2.