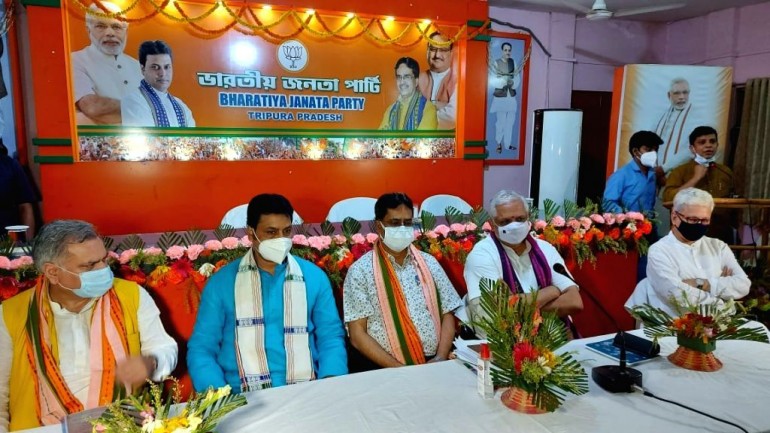 Speculation that some BJP MLAs and leaders in Tripura may follow the example of BJP national vice president Mukul Roy who returned to the Trinamool Congress, three senior central leaders have arrived in the state and are holding hectic meetings with state leaders.

The ruling Bharatiya Janata Party, however, rubbished any fresh political development in the party in the northeastern state.

Another central observer Vinod Sonkar was scheduled to come on Wednesday but his tour was cancelled at the last minute.

BJP’s chief spokesman Subrata Chakraborty said that the Trinamool can revive in Tripura as part of the democratic process but the West Bengal-based party had earlier attempted twice to establish political base there and miserably failed as it has “zero acceptance” in the state.

On the other hand, Trinamool’s Tripura state president Ashish Singha said that party supremo and Bengal Chief Minister Mamata Banerjee and national general secretary Abhishek Banerjee are eager to revive the party in Tripura and they would soon send some leaders to the state to further strengthen the organisation.

Strong speculations about fresh political developments in Tripura are rife after Mukul Roy along with his son Subhrangshu Roy rejoined the Trinamool. Roy, before joining the BJP around four years ago, had often visited Tripura to supervise the Trinamool’s organisational matters.

Under Roy’s influence, seven Congress MLAs led by Sudip Roy Barman and a large number of party leaders and workers joined the Trinamool in 2016 and next year, joined the BJP, boosting the political strength of the saffron party. All the seven were elected on BJP tickets in the 2018 polls and among them Roy Barman, Pranajit Singha Roy and Ratan Lal Nath made Ministers and Biswabandhu Sen appointed Deputy Speaker.

At Least 11 BJP legislators and some party leaders led by Roy Barman and fellow MLA and former party Vice President Ram Prasad Paul went to Delhi in October last year to discuss “party affairs in Tripura with the central leadership”.

Amid dissidence and discontent among a section of BJP leaders and legislators, Chief Minister Deb in December last year announced to take “public mandate” through public gatherings in Agartala but subsequently with the request of the central and state leaders, the plan was called off. (IANS)