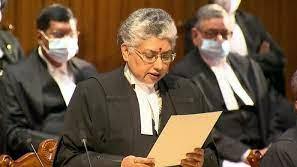 The only dissenting voice.

When Justice BV Nagarathna becomes the Chief Justice of India in 2027, she will make history by being the first woman to do so. But even in the run up to that, she is already making her presence felt.

Unafraid of dissent, undeterred with her views – Justice Nagarathna has already dissented twice within the first two working days of 2023. In both of these cases the majority view prevailed with a 4:1 ratio. Which means that while the four other judges (Justices S Abdul Nazeer, BR Gavai, V Ramasubramanian and AS Bopanna) on the constitution bench were in complete agreement with each other, Justice Nagarathna was the only judge who begged to differ.

In the first instance (the demonetisation verdict), her dissent was complete as she disagreed almost entirely with the majority judgment. In the other it was a partial dissent, with her disagreeing on a couple of crucial aspects, while agreeing with other conclusions.

So what are these judgments? What did Nagarathna say? And why does her dissent matter?

Widely lauded as being akin to Justice Khanna’s powerful dissent in the ADM Jabalpur case (which had put riders on right to liberty), Justice Nagarathna’s first dissent this year declares the demonetisation exercise of 2016 to have been well-intentioned, but unlawful.

This is in complete contradiction to the conclusion drawn by her four colleagues on the bench, who had held the demonetisation exercise to have been valid. Key aspects, highlighting the split in opinion, include:

FLAWS IN THE DEMONETISATION NOTIFICATION

The majority judgment held that the Government of India’s demonetisation notification of 2016 “does not suffer from any flaws in the decision ¬making process”.

However, Justice Nagarathna pointed out that the demonetisation of all series of currency notes at the instance of the government is far more serious than that of a particular series by the bank. Thus, such an exercise ought to be carried out through a legislation (as opposed to an executive notification, which is what happened).

The majority view was that the power available to the Central Government under Section 26 (2) of the RBI Act cannot be restricted to mean that it may only be exercised for a specific series of bank notes, and not all bank notes.

(Section 26 (2) says that on recommendation of the Central Board, the Central Govern¬ment may, by notification in the Gazette of India, declare that, any series of bank notes of any denomination shall cease to be legal tender.)

Screenshot of Section 26 of the RBI Act, highlighted for emphasis.
Justice Nagarathna, on the other hand, observed that the term “any series” cannot be construed to mean “all series.”

She also opined that the Reserve Bank of India (RBI) did not show any independent application of mind in this matter.

In yet another spectacular dissent, only a day after the demonetisation verdict, Nagarathna proposed to hold the government vicariously liable for some of the statements that ministers make. This was in direct contradiction to the opinion of the other four judges on the bench, who stated:

“A statement made by a minister even if traceable to any affairs of the state or for protection of the government cannot be attributed vicariously to the government by invoking the principle of collective responsibility.”

While concurring with the majority on other issues in the matter, including that a restriction, greater than what already exists under Article 19(2), cannot be imposed on free speech, Justice Nagarathna dissented on this key point.

According to her, if a minister indulges in hate speech in his “official capacity”, then such disparaging statements can be vicariously attributed to the government. She justified this by pointing out:

“Hate speech strikes at the foundational values of the Constitution by marking out a society as being unequal. It also violates the fraternity of citizens from diverse backgrounds, which is the sine qua non (an essential condition) of a cohesive society based on plurality and multiculturalism such as in India…”

Thus, in her dissenting view, she emphasised on human dignity, and the preambular goals of liberty, equality and fraternity.

Her dissent gathers greater significance at a time when hate speech appears to be on an exponential rise, with government figures exhibiting a shocking lack of restraint in TV debates and public meets. Think MP Tejasvi Surya’s baffling remarks, reeking of communal undertones; BJP MLA Baldev Singh Aulakh’s equally communal suggestions about the priorities of Muslim people, as quoted in media reports; and chanting of the first part of the inflammatory “Desh ke gaddaron ko” slogan by a certain union minister. Among several others.

During the hearing of this case, the apex court was also informed by the petitioners that there has been nearly a 500% rise in reported cases of hate speech made by politicians and public functionaries.

Pertinently, the apex court is also presently hearing pleas seeking a curb on the spike in instances of hate speech. In this light too, Justice Nagarathna’s view that public functionaries need to understand “the likely consequences (of their speech) on public sentiment” becomes significant.

She did, however, add that if such derogatory statements are stray opinions of an individual minister and are inconsistent with the views of the government, then they shall be attributable personally to the minister.

Finally, while the four judges held that the fundamental rights under Articles 19 and 21 of the Constitution could be enforced even against non-state actors, Justice Nagarathna emphasised on the practical difficulty of doing so.

According to her “a private body, acting in a private capacity, fulfilling a private function, cannot be axiomatically amenable to the claims of fundamental rights violations”. This is because, in order to do so, she opined, elementary differences between a fundamental right and the congruent common law right will have to be ignored.